Please, if you haven’t yet watched this snippet of your president making comments following his meeting with North Korean Leader Kim Jong-un, I invite you to watch Exhibit A: 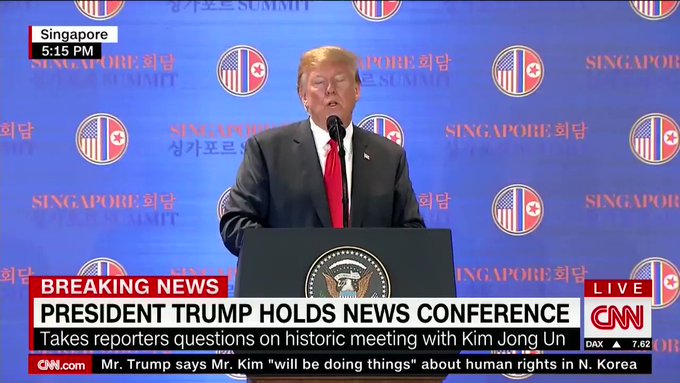 Yes. You watched that. Yes. He said that. Uh huh. Your president, the leader of the ostensibly most powerful nation in the world, said that if he is wrong, he is not sure if he would ever admit it. Matter of fact, he prolly just gone “find some kind of an excuse.” Yerp, that sounds about wh…right.

I mean, at first I was a little shooketh when I saw this. Then I got a little happy, because I was like, finally, he and I can vibe on something! Because, shit, I can’t stand admitting when I’m wrong either. Where they do that at? LOUD AND WRONG is my motto. Fumbled the play? Well, fake it ’till you make it, boo. Like, I didn’t make it all the way through a B.A., a Master of Science, and law school by just readily admitting whenever I fucked some shit up. Nah, son. And apparently, your president didn’t get to where he at by admitting that he messed up. We are finally of one accord.

We been going on for months about how this man is a liar, but I may have to revise my position, because he is actually the realest there is. At this point, it’s almost a trolling level of realness. In fact, after being shook, then tickled watching this, well, I kinda got shook again. I’m not sure that I can really take this level of realness. I talk smack about lying-ass, corrupt-ass politicians, but damn…I had kinda got used to the nice little white lies and pretend fucks that the politicians like to deliver when they don’t actually have any real ones to give. I just wasn’t ready for this man to keep it so damn real. To be honest, maybe I didn’t want it that real. Just tell me that I look good in my new outfit; don’t tell me I should have bought a bigger size. Tell me that you gone love me forever and never cheat; don’t let me know you finna get your side-chick pregnant!! WHO WANTS TO HEAR THAT?!